How I Beat the Nano Blues

50,000 words. To a greenhorn writer, that number seems like a mountain whose summit is invisible from where he stands. But I'd done it last year. And I did it this year too. So for the second year in a row, I completed Nanowrimo in which you have to write 50Kwords of a novel in 30 days. I feel like Virat Kohli, hitting a century in both innings of a test match.

Like last November, this time too I was restless until I reached the goal. When it was done, I was excited in a way that was different from last year. Last year my Nano experience was like a see-saw. Not in the writing, but in my heartbeats.

I knew how to write all right. I'd written some short stories - two were even published in Women's Era (in my wife's name). I'd even written a couple of screenplays hoping to make it as a film director some day. (They're not so bad, looking back.) I'd also ghost-written a novel for a friend. (As he had put in the money for printing and publishing, I was happy to get the credit of 'Edited By').

To be honest, I was shit scared before I started. 50,000 words in 30 days? Man, you got to be kidding. I can do that if someone adopts me for a month, taking care of my financial needs while I novel.

But it wasn't only the fear of the near-impossible target. I was one of a bunch of several writers who connected on facebook with other people participating in Nano, most of them from India. They were all new to me as was I to them, but we hit it off immediately: we were all in love with writing. One by one the others started posting their Nano victories in 4 days, in 5, others on 8 or 10, and my palpitation increased. As the 20th drew near I became nervous. I had still around 10K words to write.

Psychologically too, I was not on terra firma. I lived alone in Abu Dhabi, away from family, having to work for a living plus having to cook for myself and keep my place clean. Hell, I could go on and on and on. Wasn't so easy. When the Wrimos (members of Nanowrimo India fb group) met in person in Mumbai, Chennai, Bangalore Delhi and other places, I thought how hopelessly alone I was, and was just short of a depression. In spite of countless google and nanowrimodotorg searches I couldn't find a single Nano enthusiast in UAE who I could team up with. It was a long internal soulfight. Eventually, I won. But it was hard.

With all these pressures, I freaked out when I finished my goal. I jumped and danced with joy in my room. I called my wife to give her the good news. I went out to dine at an Arabic restaurant and then walked for nearly one and a half hours by the sea at night at the Abu Dhabi corniche.

And I announced my win with a photo of Ranbir Kapoor dancing to 'badtameez dil' on facebook.

But this year it was different.

Till October 28th I was undecided whether I would participate. I wanted to, but I wasn't able to come to a decision. "Something" happened that prompted me to plunge in with a murder mystery. (More on that later).

I cooked up a situation for a murder, but I didn't know how to go about it as mystery/crime was not my writing genre. So I asked for help from my fb friends and with their tips I managed to work out a thin plot with which I could work on in November.

Though I was unsure, I wasn't nervous. The SAW (story a week) an initiative of Wrimo India on fb had made me write a short story every fortnight so in the 11 months between two nanos I had written 17 short stories. Sometimes it took me two whole weeks to write a story while I remember writing a couple of them in just one night. The themes were all different - a fairy tale, a murder mystery, a love story, a hate story and a lot more.

Being a part of The Book Club, I'd also read and reviewed quite a few novels and that boosted my confidence too.

On November 1, I had no doubt that I could write a novel in 30 days or less. I made a bargain with myself: I would get up at 5 am and hammer out two thousand or more words or more EVERY DAY before I left for office.

That really helped me. For the first 7 days I managed to write nearly 2.5k words, then I began to lose my touch. By day 12, I had written around 23,000 words. Still, that wasn't bad. It wasn't very far from an average of 2k words a day, which was the goal I had fixed for myself.

I had a general idea of the story and writing scenes was quite easy. There were a lot of digressions, of course, as had happened in 2013 too.

Out of nowhere a viral attack forced me to quit writing for nearly 10 days. For the first couple of days I popped some pills and tried to write as much as I could, however little it was. But then the meds wouldn't work and I was unable to handle the office pressure, looking after my daily needs and my own illness. Score: 8 days - zero words.

By the time I recovered it was the 23rd - quite a few of the wrimos had completed their 50K words and boasting (no doubt they had every right to do it - even I would have done the same - after all, isn't that what Nano is for?)

Though I hadn't lost my zest, doubts began to creep in. What if I couldn't complete it this year? Well, no big deal - it happens to the best of them. Am I not human? I tried to convince myself but I was no good at it.

Then like in all good novels, the devil showed up. 'What are you worried about Neelesh? You've got two half-finished manuscripts both together can easily cross 50,000 words. Just put it up and get it over with.'

I didn't punch him in the face. Not right away at least. The idea was not impractical. It's as easily done as it is said. If nothing works out, what's the harm? It's all about winning, ain't it?

And one of those days was a Friday - a holiday. I did the unthinkable - I wrote 5K words in a burst of inspiration. I don't know where it came from - but it sure as hell hit me when I needed it the most.

That left me with less than 10 K in 4 days. I kept punching the keyboard every day till I finished two days ahead of schedule. I didn't have to do the devilish trick - the writing just flowed.

Mission Accomplished! A clean straight drive to the long-on fence - and the trophy was mine for the second time in a row.
Posted by From the heart-need at 10:22 PM 2 comments:

Cover Reveal of 'She Loves Him, He Loves Her Not' by Zeenat Mahal


She Loves Him, He Loves Her Not
Stripped of her illusions, Zoella creates her own twist in the fairy tale, beating him at his own game.

Zoella’s been in love with Fardeen, her best friend’s gorgeous older brother, since she was ten, but he’s always seen her as a ‘good girl’—not his type—and he can barely remember her name. Besides, he’s engaged to a gorgeous leggy socialite, someone from the same rarefied social strata as the imposing Malik family.

Zoella has no chance with him.

Until a brutal accident leaves Fardeen scarred and disfigured, that is. Suddenly bereft of a fiancee, Fardeen is bitterly caustic, a shell of the man he used to be, a beast that has broken out of the fairy tale world he once lived in. And a twist of fate lands him his very own princess—Zoella.

The beast, however, is a far cry from the Fardeen of her dreams. Stripped of her illusions, Zoella creates her own twist in the fairy tale, beating him at his own game.

Zeenat Mahal (@zeenat4indireads) is an avid reader and has been writing for as long as she can remember. She has an MPhil in English literature from Government College Lahore and holds a MFA in creative writing from Kingston University, London. She won a BBC short story competition in 2001 and has been a regular contributor to newspapers. Zeenat has eclectic tastes and an insatiable desire to learn. Her romances are a heady mix of the traditional and the contemporary, old world values face the challenges of a shrinking globe that impinge upon and help shape South Asian sensibilities.

‘Haveli’ is Zeenat’s first published novella. Currently she is working on a literary novel with elements of magical realism, while continuing to write romances. She can be contacted on her FB page https://www.facebook.com/pages/Zeenat-Mahal. 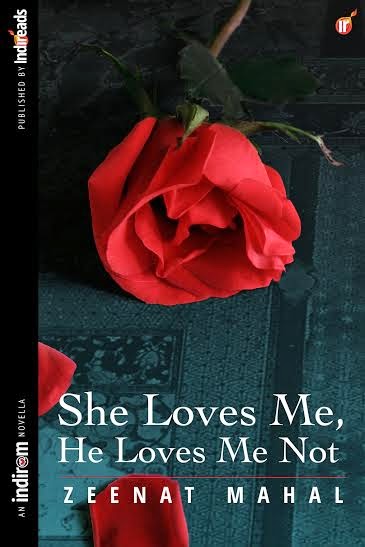 Posted by From the heart-need at 2:41 PM No comments: